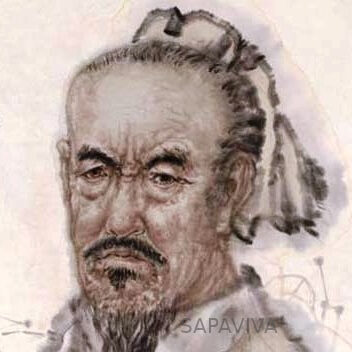 Regarding intellectualism, Zhu Shijie was discerning, thorough and versatile. He is without question one of the greatest mathematicians to come out of China. His exploits on Multivariate Polynomials remain till this day, a glowing firework. The same could be said about his methods of solving Linear Equations: by reducing their matrix coefficients. For two decades, Zhu traveled far and wide across China (including its adjoining territories). In the process he mentored and tutored many students, who in turn, helped to advance Chinese mathematics. His famous books: Suanxue Qimeng (which is An Introduction to Mathematical Studies, published around 1299 for beginners), and the Siyuan Yujian (whose alternative name is The True Reflections of the Four Unknowns, published in 1303 for advanced learners), refined and extended the scope of the centuries-long acclaimed Nine Chapters on the Mathematical Art. Both publications became so popular that China’s neighbors (especially the Koreans, Japanese and Persians) incorporated them into their syllabuses. Their high standards characterized by elaborate illustrations made them the bestsellers of that era. Centuries later, several mathematicians including Blaise Pascal and William Horner, would gain fame just by reenacting few aspects of Zhu Shijie’s methodologies. Apart from mentoring scholars during his 20-year sojourns, Zhu succeeded in unifying the traditional math methods of north and south: by harnessing the bests of both regions. Although he is remembered as a genial instructor whose indelible footprints remain in the sands of time, he is equally extolled for remarkable exploits in mathematics, engineering, geography, geology, surveying, architecture and agriculture.